I would say it was serendipity that day at the Gold Standard.

Those two chef’s I always saw on that Univision morning show “Despierta America” my mom watched everyday were there, and I, forced myself to introduce myself to them: Ramiro ArvizU and Jaime Martin Del Campo of La Casita Mexicana. It was long overdue. They were sampling some Ceviche Verde (Green) that I initially thought to be just a chef-ed up version of the classic Tomato-Onion-Lime Mexican Seafood classic. Tasting it, the unique, bitter taste of Epazote, known as the "Skunk Plant" back in Aztec time stood out immediately. The type of fish used that day was the signature wide-flaked flesh of Bacalao (Cod), a saltwater fish that is also readily available in the Southeast Coastal regions. Hmmm… Going up to them, they immediately informed me it was a version seen among some provinces around Veracruz where Epazote is still used as well as Cilantro. This sparked a rather long, detailed conversation that only two passionate chefs and a self-discovering food writer could keep up with. Not just about food, but…authentic food from Mexico. The other dishes that never made it to the Mexican Chain Menu quo of Fajita platters, ‘hard shell’ Taco’s & ‘Wet’ Burritos a’ plenty.

My roots, my past, my history, a sacred bond I’ve recently discovered in my first trip to my parents state of Zacatecas, Mexico…was not this. This unfortunate truth was equally—if not even more—mourned by them. That was it. Something needed to be done to clear the greasy, cheap, easily prepared confusion that is sadly the bar for most Mexican food in the U.S, yes...even L.A. So, I rallied the diligent few who spun their own web, straying from the allotted venting of Yelp and Chowhound: the Los Angeles Food Bloggers (only ones that make it to my links on lower right), they have become a foodie family for me and I felt they needed to know what really was up.

An 18 course learning experience was to be had on Wednesday March 25, 2009 at La Casita Mexicana. This was that dinner.

We started off with a showcasing of many traditional Mexican foodstuffs.
Black Corn is grown in only select regions in Mexico because it is a lot harder to maintain. Their kernels are almost as starchy as potato when cooked. 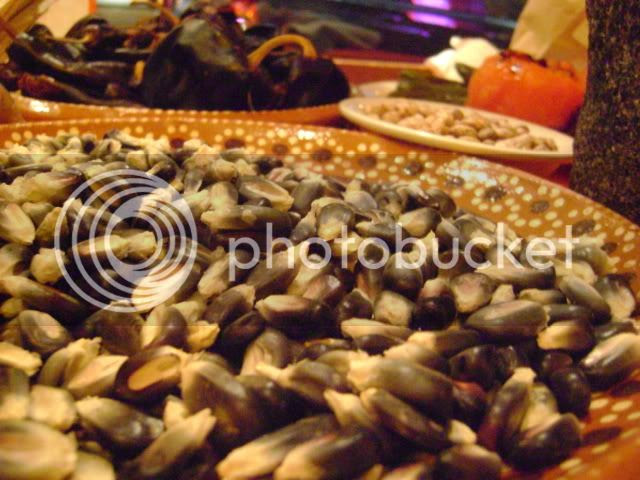 Preserving foods is an Art in Mexico that is practiced with just about any perishable, in an attempt to let less go to waste. Even making jams with savory items like Cactus paddles and Chayote a water-fleshed gourd vegetable apparent in more Central states. 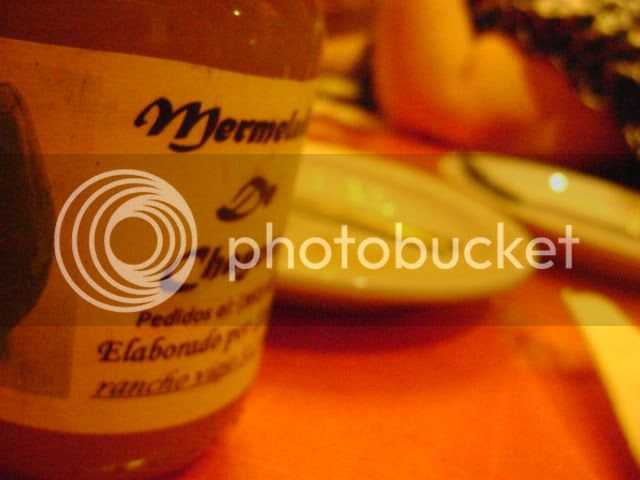 Of course, a table side showing of old fashioned Salsa making was thrown in there somewhere...Lava Rock Molcajete and good 'ol Elbow grease, no blender/food processor, keeping it old school. 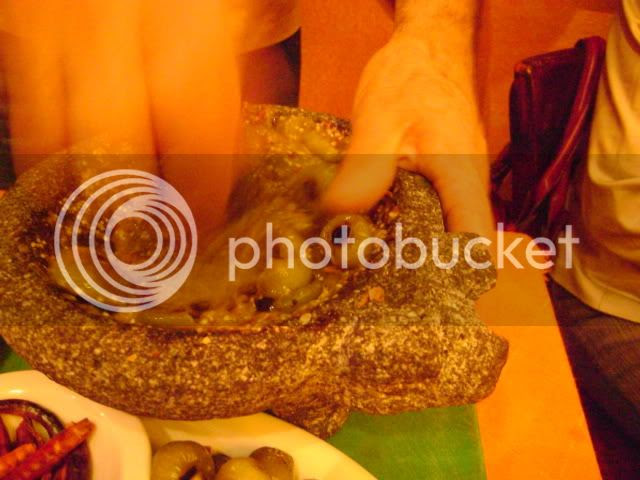 Now, it's time for the main lesson: 18 courses, covering the barren desert bounty, the humid coastal concoctions to the ways of the tropical wetland--Mexican gastronomy at it's tribal finest. 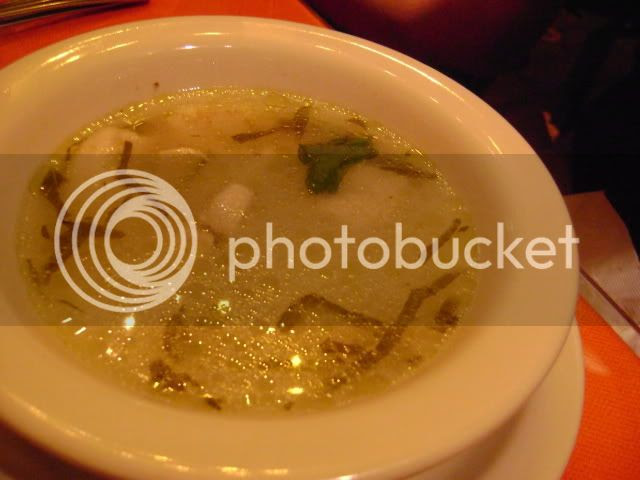 Hoja Santa is a broad leaf used as an Herb mostly Oaxacan dishes, the flavor and smell is reminiscent of root beer. Some diners were suprised how the soup had some Tom Yum qualities to it, this is how it is when prepared good, that's all. Tuna has made it's way into Mexican Culture. Seen more in coastal states like Veracruz. These are not as spicy as you would think.

3rd Course: Queso Azteca (4 different Cow cheeses, blended with Epazote, Chiles Poblanos and little strips of Cactus, Nopalitos. This is then wrapped with a Banana Leaf and Grilled on open flame) 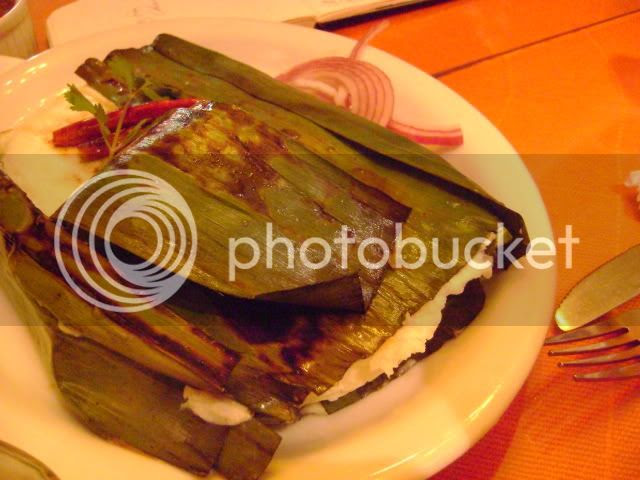 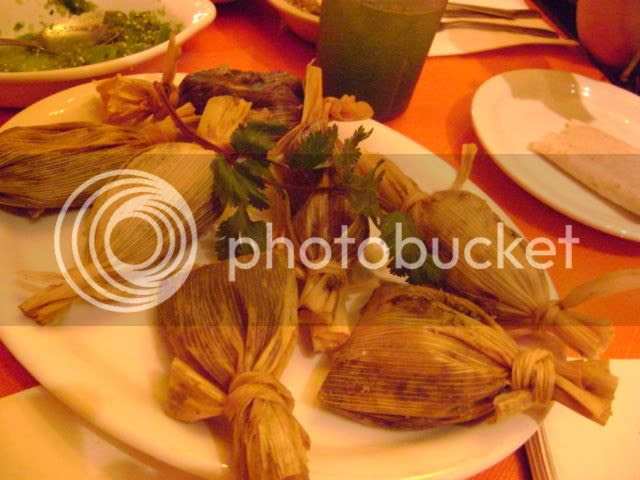 Seasonal, mostly seen during May. The jet-black fungus that grows on few, lucky Ears of Corn are prized in Mexico. Usually pricey and used in Quesadillas in Central Metropolitan street food. 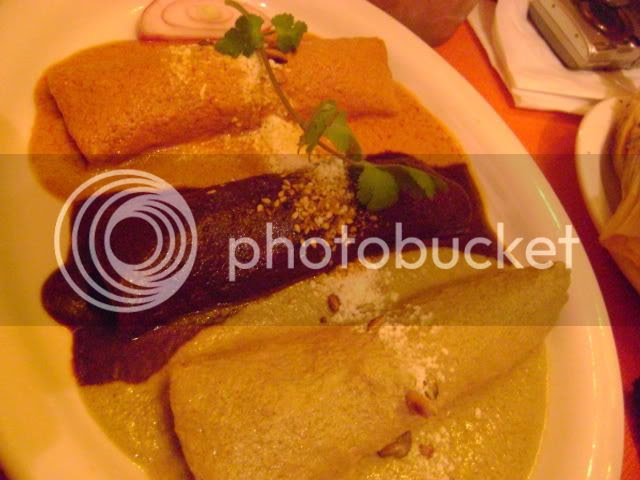 Not just beautiful looking. Each sauce bringing it's own essence from different regions of Mexico. Sweet Poblano from Puebla, nutty Pumpkin Seed-intensive Pepian Verde from Central States, and Spicy Rojo from Southern Central. 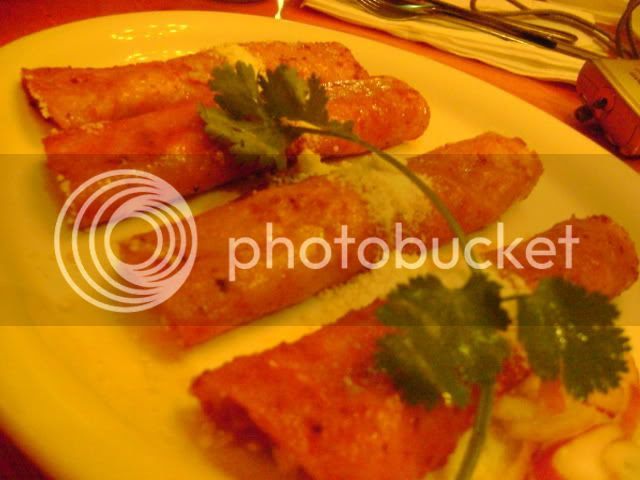 Keeping the age-old tradition of lightly dipping the tortillas in hot oil before Chile makes layers of flavor. 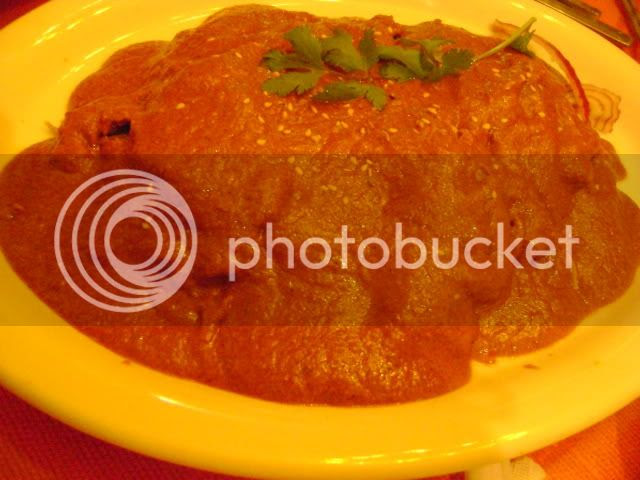 This protein is choice all around the Motherland but in combination with Mole not so much, popular in Jalisco. 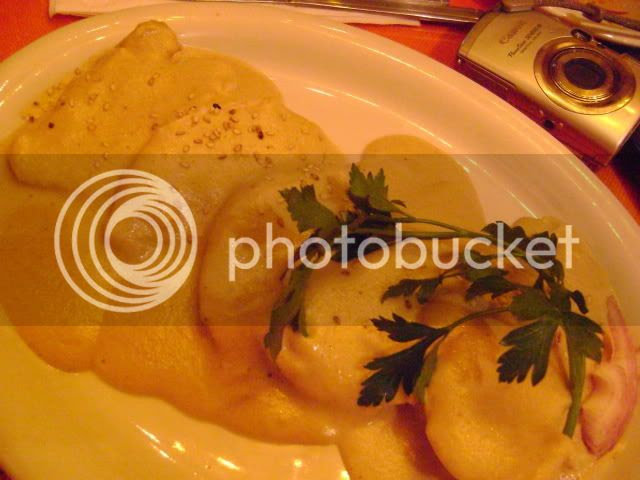 This Mole is an antique recipe found in Tlaxcala with touches by Jaime y Ramiro. It is believed to have it's origins by abiding to a Brides demand of not wanting to get dirty on her Wedding day. Made with same ingredients but just their white counterparts: White Chocolate, White Raisins, White Chiles etc.. 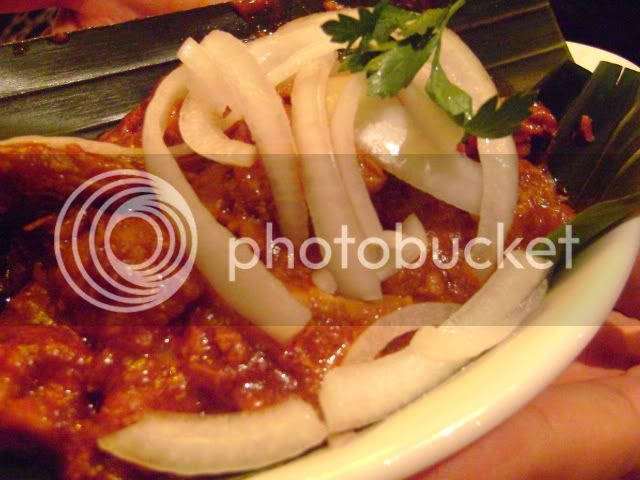 Sweet and Spicy Sauce...Mexican Style. Jaime and Ramiro said this was from a recipe some Aunt had or something.

I know it was floating around somewhere in the Table, didn't get a chance to take a photo.

Naranja Agria are excruciatingly hard to find in L.A, needing almost entirely sub-tropical climate, it is used in many Latin American cuisines. It has a special kind of puckering tartness to it found in no other citrus fruit. I think they found someone who grows it in their backyard recently... 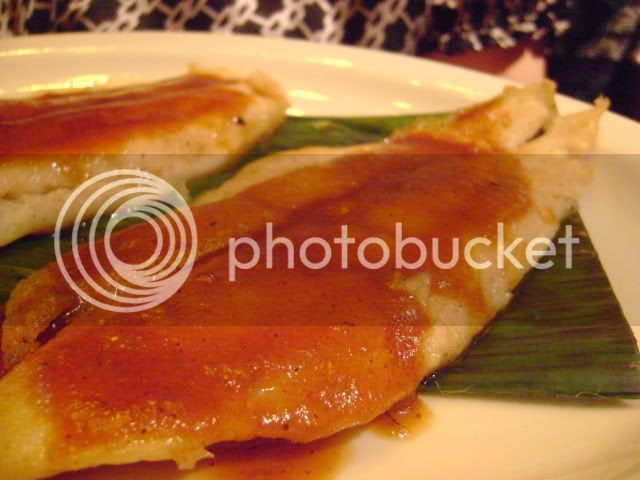 Tamarindo pods are peeled and made into candy, drinks, topping for Raspados (Mexican Shaved Ice). Here, they dug for this recipe incorporating pods freshly imported from Nayarit. The sauce was tart and spicy, excellent for fish.
12th Course: Cecina al chipotle (Dry-Cured Beef cooked and slathered with smoked Chipotle Chile) 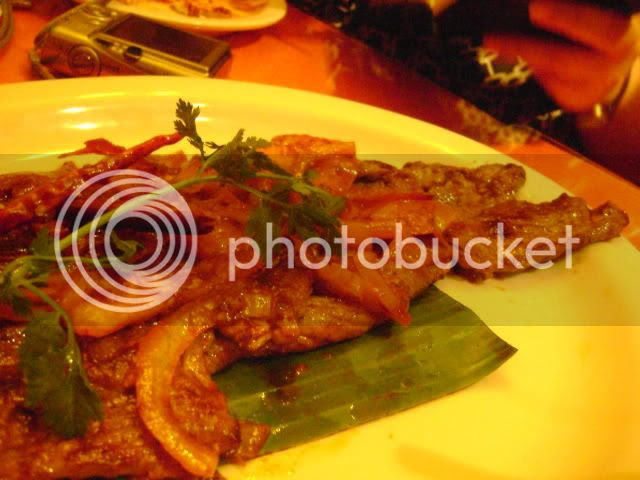 Beef dish hailing from Veracruz region to dyspel belief that all of their food is Seafood, it's one of the few dishes where Chipotle Peppers as well as Olive Oil is used in cooking, Olive oil goes for entire region's cooking. 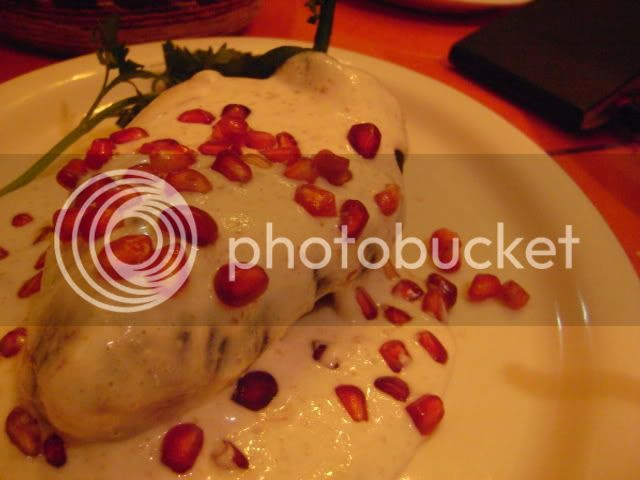 This is probably Jaime and Ramiro's most notorious dish. Cooking the pepper to crunchy perfection, stuffing it with ground pork mixture involving Dulce de Biznaga (Crystallized Cactus), topping it all with a Pueblan cream sauce made from Pecans, and finally sprinkling a few fresh Pomegranate seeds on top.

Dulce de Biznaga is becoming harder and harder to find, making it a lot more expensive where ever they do have it. It tastes faintfully herbal, also used in Mexican desserts. 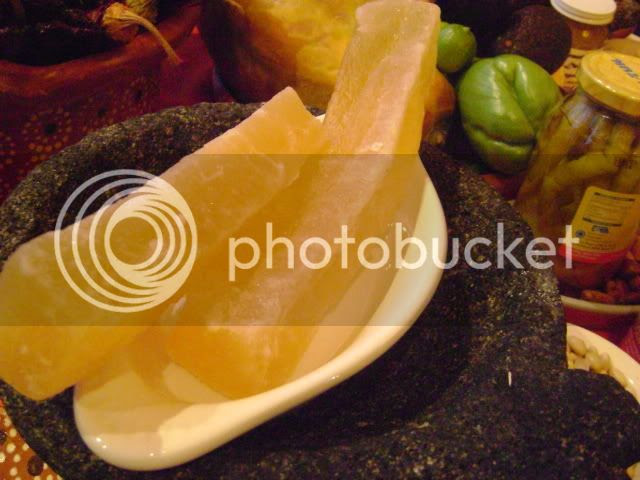 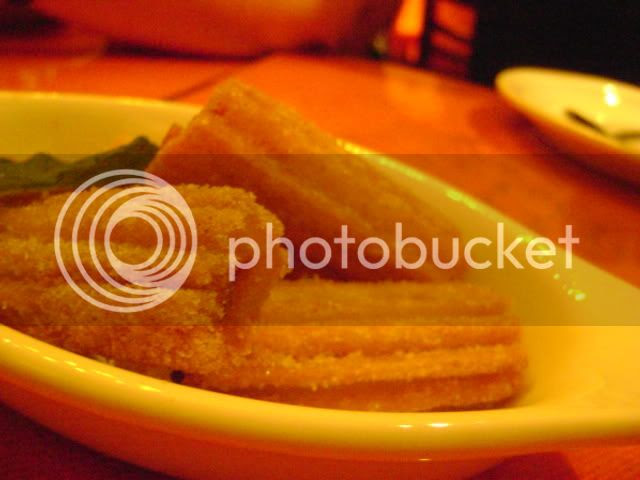 Caramel is universally loved all through out Mexico, both it's Goat's and Cow's Milk ones (probably equal). Rich and when done good, not cloying. Churros are superb with this. 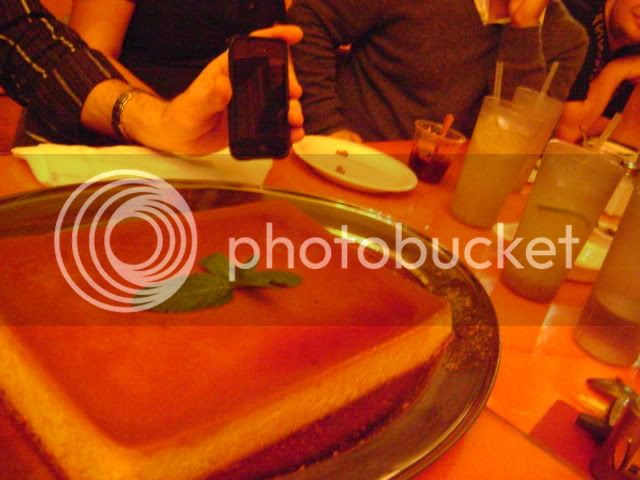 Jaime and Ramiro made a huge sheet of Flan for the whole table! Pumpkin sweets are hugely popular all through out Mexico. In this Flan, it just added another realm of silkiness. 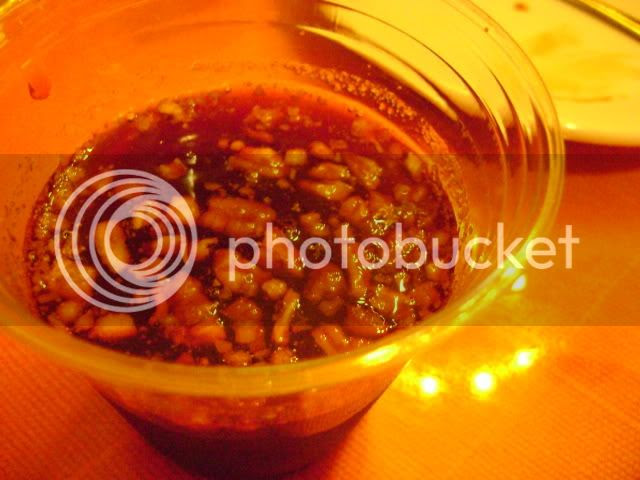 Traditionally mixed with Tequila, this is a Winter, Christmas time only drink. It's just a motley brew of about whatever fruit you can find. This time it was Jocotes, tiny crabapple-like fruit. 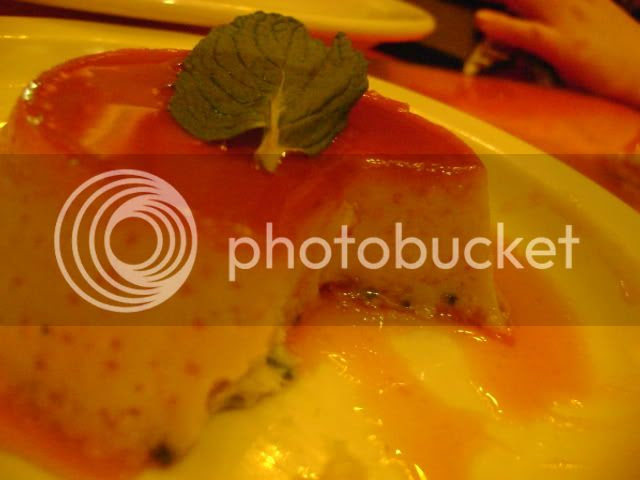 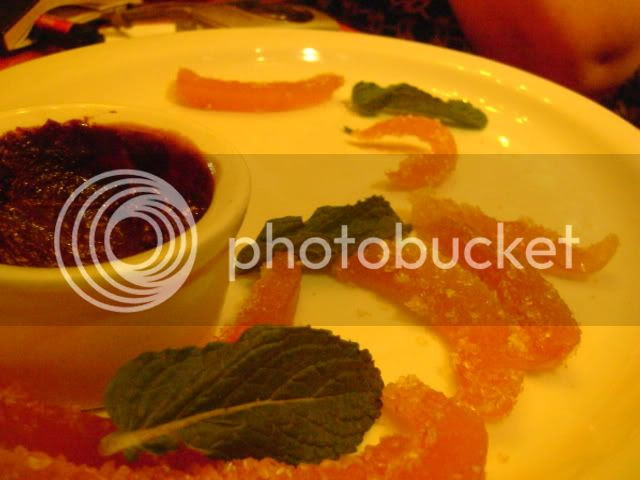 Super Labor Intensive, process taking 24 hours to complete. Apparently, in older times, this dish was made by nuns for the highest class of clergymen, cardinals etc. Grapefruit is dessicated with Rock Sugar and then dipped in chunky chocolate paste.

This was it. I hope we all learned something.

I certainly did...a lot of new things I myself didn't even know.

That jamaica they made looked like something I'd like to try someday,and i really like fan so that picture really made me hungry so thanks,really enjoyed it.

You're the best Javier!

Thanks again for arranging that epic feast. I always enjoy reading your writing. Very good job of capturing the scene and putting the dishes into context.

javier, this is jin. i met you at stk. i'm the filmmaker doing the foodies doc. are you free on sunday at all? let me know what your schedule is like for sunday. do you have a place you know the owner well where we can go for an afternoon snack or dinner? let me know. my email is jinyookim at gmail.

Great review! Wow, that looks like an epic meal. :) The Moles look so good (along with the other dishes).

I can't wait to try out La Casita Mexicana soon. :)

everything looks and sounds like a pure delight; definitely bummed about missing out on this when you were putting together a blogger dinner. But it's definitely way up on my list of "to-try".

Not a day goes by that I don't tell someone about La Casita Mexicana.

Dude, that was an epic night. I need to put some sort of thought process into this. Thanks again for organizing this feast!

hey javi. this is andrew from the amar collective. your blog is freakin epic, and probably some of the best writing about food I've read in a long time... did you check out the 7th annual grilled cheese invitational yesterday? it was pretty insane. anyway, man, just letting you know you're on to some good stuff with this. peace!

I like Mexican food so thanks for sharing this good eats info - sounds like an enticing recipe! I'm looking forward to doing some taste testing there on my next trip to La Casita Mexicana. thank you for shearing your post.