So it finally came, I’m 21. Who would of known I would of made it this far? I swore and lived by the punk Manisfesto of “Live Fast, Die Young”, albeit a little bit more responsively than most of my friends apparently.

What does this mean for a burgeoning young foodblogger?

THE WORLD IS MINE.

No more getting sadly turned away from food events for being “underage”, no more ordering drinks with know-it-all terminology to better the chances of not being checked ID, no more using “I’m not 21” to rationalize from not going out and the most significant for me…no more having to depend on a passerby bum or guy with a beard to buy me some craft beer at Ramirez Liquor.

And what better rite of passage than throwing my own backyard gig in my house in East L.A? 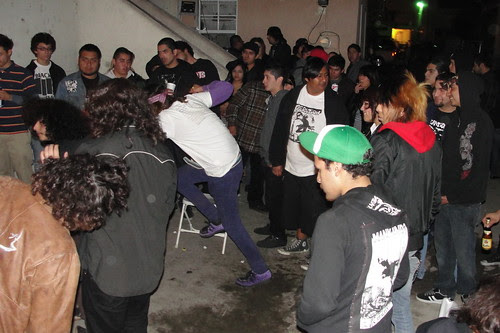 Almost every single weekend since 6th Grade, I’ve been coming to these in and around East L.A. They have served as the ultra-thin lifeline that has kept the local punk scene stable since the 1970’s.

For my shindig, I had gotten the evolved, bluesy sounds of The Shag Rats, old friends from Middle School, these guys broke out of the stereotypical power-chord punk rock rut and have developed a mellow, groovy beat of their own. 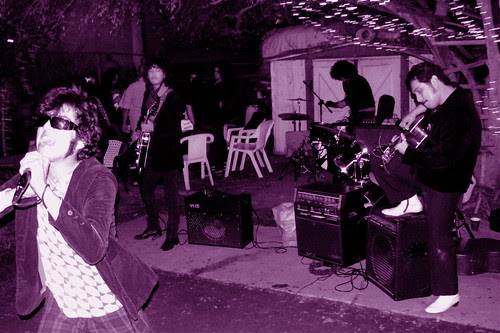 And my nephew, DJ H1N1 spinning all classical and requested genres of punk. 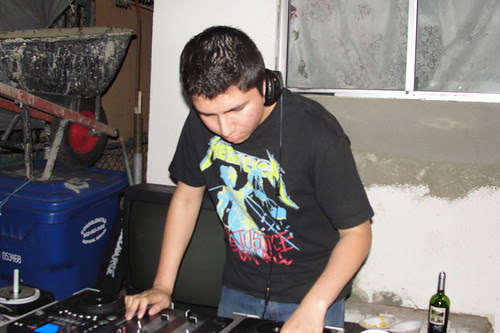 Declaring it BYOB (Had food rather, not common in gigs but then again it was me!) I found out I had some really generous friends…

Chuy Nomas showed up with three bottles of Real De Mexico Tequila, two Blancos and the other Reposado. He works for them so he hooked it up like no other, setting up an impromptu cocktail bar out of my backyard shambles. He just happened to always carry Jalapeños, Cilantro, Pineapple Juice, Simple Syrup and Limes I guess, constructing their signature cocktail, The Real Mexican, an authentically spicy, tangy sweet drink that my dad even loved. Muddling the ingredients and everything, he came through profusely for the first half of the night. 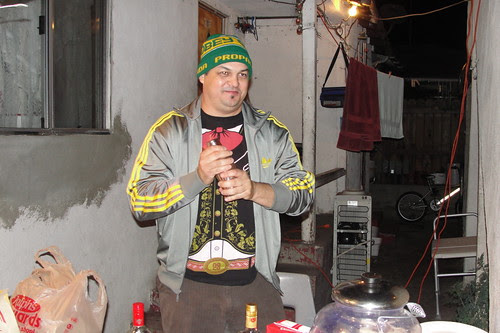 A gift from the blue-haired homie Lance Thomas, my second drink of the night was a pint of an Imperial IPA from Rogue Brewery, the ceramic bottle and nifty, metal hinged top had caught my attention back at Ramirez Liquor. 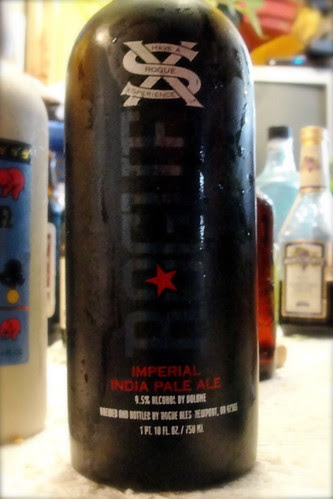 Bitter, Syrupy with Hints of Raw Cacao Without The Exclusive Heaviness of a Traditional Stout: 9.5% 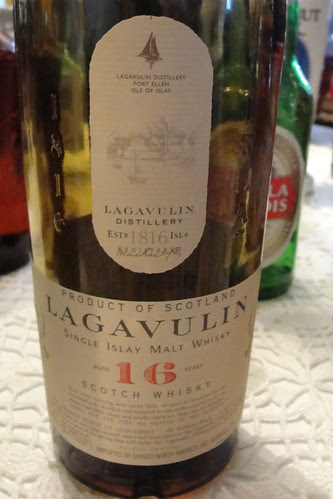 At 86 Proof, This Was By Far The Most Complex Whiskey Ingested Thus Far (Sorry Jack): Smooth and Smoky Taste Reminiscent of Mezcal

Third of the Night was a shot of Lagavulin, a Single Islay Malt Whiskey given to me from the infamous Noah Galuten of Squid Ink blog. 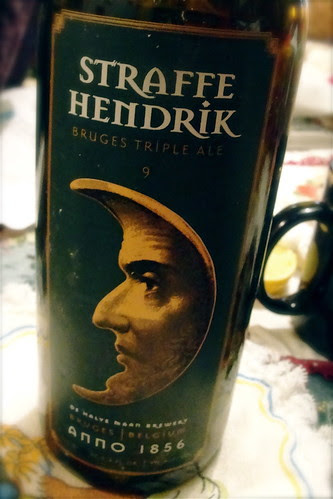 Fourth was a pint of Straffe Hendrik, this heavy Belgium Bruges Triple Ale. At a bold 9% proof, this was remarkably bitter since its made with a few different Hops, A nice winter brew for sure.

Fifth of the night was a Leffe longneck, a Blonde Belgium Ale with an interesting light bite, notes of toffee mostly with aromatic hints of chrysanthemum. A gift from Angel Rodriguez, we used to drink Popov vodka in water bottles during lunch back in High School. 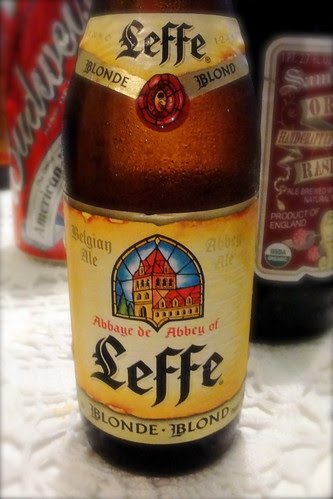 But I kept on going of course.

Sixth of the night was half a bottle of this Malbec that my yoga buddy Blair Whittington had gotten me from Fresh N Easy. But I have no idea what year nor what vineyard, I could only tell you it was smooth enough to be drank by swigs…l would of drank all if Bricia hadn’t fortunately taken it away from me and refilled it with water. 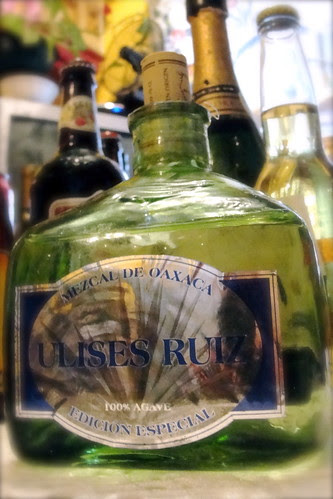 Seventh of the night was a couple of cringing swigs of Ulises Ruiz, a snazzy bottled complex Mezcal from Oaxaca with the most elegant of burns and deep of tastes, courtesy of the Oaxacan Restauranteur, Bricia Lopez.

And last but certainly not the least, a pint of the beer that started it all for me: Delirium Tremens. Chocolaty and robust, this cork-topped Ale is bottled from a family brewery in Belgium. Fernando Lopez, the other power behind the Guelaguetza restaurant dynasty, was responsible for this tasty night clincher. 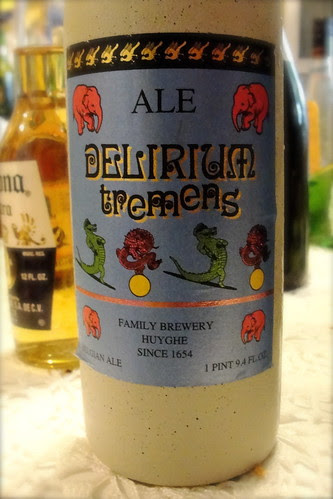 After all this drinking, The Shag Rat’s were done and another friend’s band wanted to play: Informal Society. Their music is probably the complete opposite of the Shag Rats, hard, fast, loud and proud that warrant a little more vicious chaos in the pit. And these sort of pits are no mans land for lanky, intoxicated, Spaghetti framed people like me… 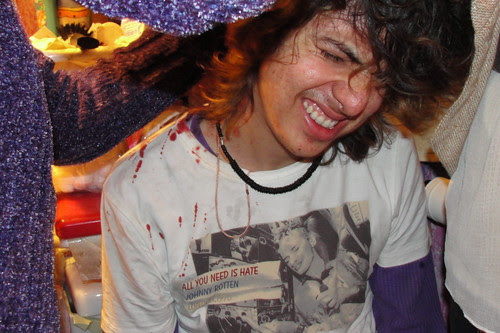 All I remember is a sudden colorful flash like those made famous in loony toon cartoons and people wrapping bandana's around my head. Sure enough someone had knocked me down, probably the local gangbangers not understanding the friendly concept of slam dancing.

I was not about to let that ruin my Birthday night in the least though, within ten minutes and half a hydrogen peroxide bottle later, I was back down and dancing again. With those same gangsters giving me hard high-fives and saying, “you’re pretty down”. They left shortly after that. 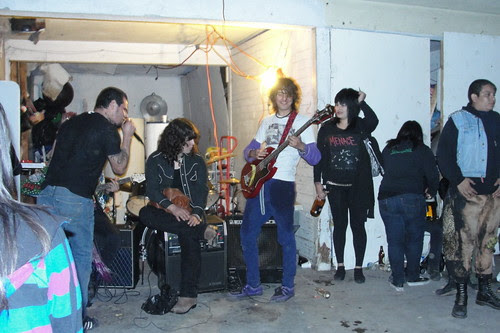 Bad Influence: Bloody, Boozed But All In The Name of Punk

The singer from my old band kept badgering for us to play, so we made drunk fools out of ourselves trying to stay in sync. I played both bass and guitar for the night since our bassist had already passed out earlier, surprisingly enough, some random people actually know how to play our songs on the guitar and volunteered.

And I am happy to say I woke up with NO HANGOVER, but only a bloody pillow and a bunch of leftover love... 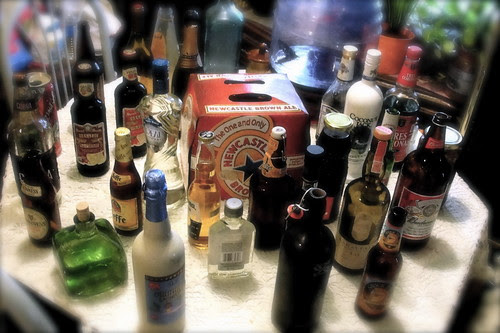 I totally forgot to add a pint of Pulque I babied all through the night, I had smuggled it into the states and had been saving it for this big day. Stayed true to my roots...
written by glutster at 9:12 PM

Haha, looks like a fun time all around! Happy Birthday, and stay safe!

You already have great taste in beer, but then DUH, you're a foodblogger. Ramirez is great. I'd stop by there after work at Hollenbeck sometimes for some Teacher Juice to get me through the night ;)

This is so awesome.

Welcome to the world of legal booze and gambling.

Booze, Blood & Punk Rock...wouldn't have expected anything less for your 21st. So freaking cool!

I am so unbeliveably excited for you! Happy Birthday Javier!!!

At least it was all top notch booze... Happy Birthday!

Thanks all for your support and warm wishes. I would not be where I am now if it wasn't for you guys. Your comments and readership is what has kept the Glutster alive...

OOh, happy birthday and can I come over to help you finish off your booze?!?

I'm not sure what the most amazing part of your night was...probably that you woke up with no hangover. Enjoy it while you can, buddy.

Happy birthday. Javier! I can't believe you are only 21, haha. Hope you have many more happy and blessed years ahead of you!

Hola, Javier,
You might have a really, really fast metabolism and a cast iron estomago, but remember to baby your liver once in a while.
Tu mama told me to tell you . . .!

Sounds like you had a wild and fun evening (and I hope you've fully recovered from that bloodied slam dancing).

Happy Birthday!!! :) Sounds like it was a good one.

Happy belated birthday, Glutster! See you at the next Pleasure Palate event!