Introducing "The Chosun One" Burger At 8 oz : A New Korean American Fusion On Melrose 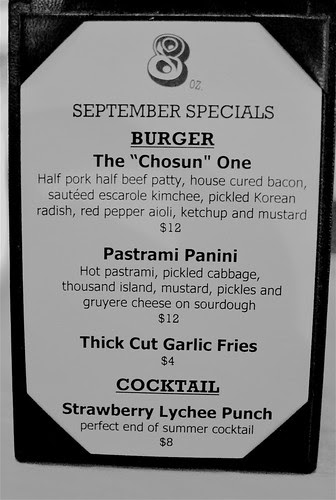 The Chosun One: To Bless 8oz With Its Presence

So the homie Eddie Hah of 8 oz Burger called me up recently and invited me down to try this burger that he’s been working on. Apparently, 8 oz has a “burger of the month” deal and it was finally his turn to shine and show his acclaimed boss Govind Armstrong a Korean thing or two.

“I gained at least 8 pounds working on this burger” Eddie tells me as he shows up 2 hours before his shift just to show me his meaty fruits of labor. His apron is already stained with translucent meat juices as he plates up two of his latest renditions of it.

It was immediately apparent that this was not just any typical 8 oz burger. The wafting fumes of charred meat reminds me of one a many Korean BBQ’s feasts I’ve had with the guy. The layered creation takes two hands to handle. The buns are thick and pliable, lightly toasted and every element of a great burger is present.

Starting off with the spread. A super rich, freshly emulsified gochoo jang aioli that Eddie made his own with roasted sesame oil and only the yolks of the luckiest eggs. Next up is the food perfection that are the crispy bacon strips. They’re house cured here and adheres beautifully to the spread, giving a delightful BLT-like “brown, crispy edges” taste to every bite I took.

To add a little liveliness, Eddie pickled his own julienne daikon strips for his creation. They reminded me of those same pickled roots that garnish Vietnamese Bahn Mi’s but not as fishy. I should also mention he started pickling his own Escarole Kimchi for this burger too, which he purees and sautés to intensify its red chili flavor. The Kimchi is not the garlickiest or saltiest but it caters to the Melrose crowd, what do you want? They’ll probably like the familiar flavor of tangy mustard that Eddie smears on the bread too.

And finally, there is his proud patty. Coarsely ground with whole chunks of meat in tact, it is a 50/50 blend of both pork and beef. Scallions and Parilla leaf speckle the thick meat puck and there is a whole 6 1/2 oz of the stuff. Its to be eaten with caution due to its extreme juiciness. The patty itself is actually a classical Korean dish already and Eddie just burger-fied it by grilling it over open flames.

In the end, the burger delivers everything that Eddie Hah wanted in a burger. Unabashed Korean flavor but catered for a burger place on Melrose. He tells me he used to eat the patty in his youth between two slices of white bread as a snack, his family owned the late Sa Rit Gol Korean Restaurant (loved by gurus Mark Bittman and J. Gold alike), therefore he is no stranger to makeshift “Korean Fusion” dishes. 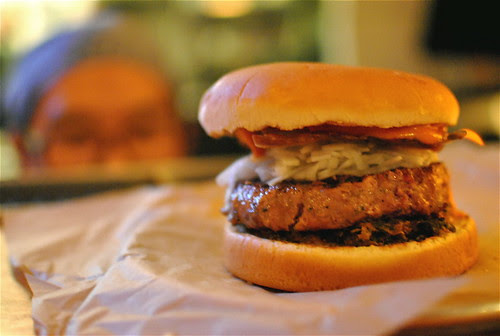 The Chosun One: And Its Beholder Eddie Hah

“What are you calling it?” I ask him. “The Chosun One” he replies.

"Eddie…your burger is now officially complete, go home and get some rest now".

This is fantastic news. I love 8 Oz. AND Korean. Dying to try!!!

Noms: I'm going back very soon as well, just a word of warning. Its juicy!

Oh man is this only for September? Just saw this on Eddie's blog. I definitely want to try it (and I still have my groupon!) Uh, 8 days to try it I guess unless they extend to October :P